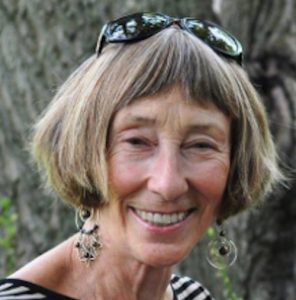 Beginning in the early morning hours, she can often be found in her studio creating Contemporary Fiber & Textile Art. 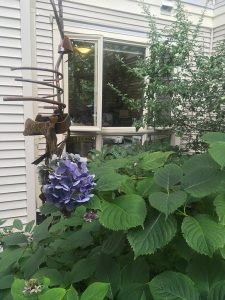 Moving from her Nanoose Bay Studio in June 2018, she has settled into her new studio in the heart of Nanaimo.

Her sense of place continues to inform her work.

This time her studio is nestled among mature & glorious Rhododendrons & Hydrangea which were the impetus for her moving to Vancouver Island from Calgary in 1994 in the first place!

STUDY
• Her evolution as a studio artist was initially influence by the several classes taken with the legendary Nancy Crow in the early 2000’s
• She has continued her technical study with many other artists on Vancouver Island & in North America
• She has supplemented her art study through visiting Museums & Galleries of North America, New Zealand, Australia & Europe.
• Her photography is used in her design work along with her computer & iPad. She prints on a variety of fabrics with her super duper printer!

SERIES FOCUS
Her initial contemporary work’s subject has focused on the Madrona (Arbutus) bark, leaves & trees that surrounded her Nanoose Bay home & studio . Most of the 3 series are now sold & reside in homes from Eastern to Western Canada & southern U.S.

She plans to expand into series that will centre upon her new environment.

Her work has been exhibited and juried into both national and international quilt shows and galleries, with pieces being published in a variety of media.